The ‘Barista’ game is based on the ‘Facial Expression Recognition Task’ neuropsychological test. This task is used by scientists to measure emotion perception. Game elements are added to the neuropsychological test to motivate and enthuse candidates. The candidate is absorbed in playing the game (this is referred to as ‘flow’) and is therefore less aware of the assessment element. The game results thus better reflect the candidate’s best performance. A big advantage of using a game is that it improves the candidate experience. Using a game and game technology also means that we can measure emotion perception more accurately, thus enabling us to collect a greater amount of data in a shorter period of time.

Emotion perception is an important element of emotional intelligence. Today there is still no consensus on what emotional intelligence entails. Most definitions see it as the quality or ability of an individual to recognise, express, understand and manage emotions in themselves and in others in order to deal with emotions as effectively as possible (Mayer, Roberts & Barsade, 2008; Van Rooy, Viswesvaran, & Pluta 2004; Zeidner, Roberts, & Matthews, 2008). The perception of emotions is therefore a crucial building block in emotional intelligence. People observe emotions in others through verbal and non-verbal behaviour. Facial expression is essential for the non-verbal communication of emotions. The ‘Barista’ game thus focuses on the emotional recognition of facial expressions.

The ‘Barista’ game can be applied to all contexts, both selection and advisory, in which emotion perception is important. The ability to recognise emotions in others is important in professions in which the emphasis is on interpersonal contact. For example in sales, in management positions or in positions within the social services.

This game is based on the ‘Facial Expression Recognition Task’ neuropsychological test. Game elements such as graphics, levels, rewards and feedback have been added to the test.

A database of 124 photos of faces expressing the five basic emotions (anger, sadness, joy, fear and disgust) and neutral was created for the game. Based on research, only those photo pairs were selected in which the research participants agreed about the emotion shown. A photo pair was comprised of a person expressing an emotion in one photo and a neutral facial expression in the other. Using a photo morphing programme, new photos with a variable emotional intensity were then generated (160 photos). These were shown to 64 research participants. 54 photos were selected for the game, based on agreement about the emotion shown and its intensity.

The first version of the game was tested in three qualitative pilot studies. Both the design and content of the game were improved based on the study participants’ feedback and experience. A usability study was also carried out to ensure that the game was in line with the target group, the general Dutch workforce. User experience and game interpretation were analysed by conducting interviews (thinking-out-loud and probing interviews) with people (N = 23) from various cultural backgrounds, educational levels, age, and game and computer experience. The results of this study formed the basis of improvements to the game and the tutorials, thus making the game accessible to everybody.

The current reference group is based on data collected from research. This sample (N = 172) is representative of the Dutch labour force in terms of work situation (working or not working), gender, age and educational level. 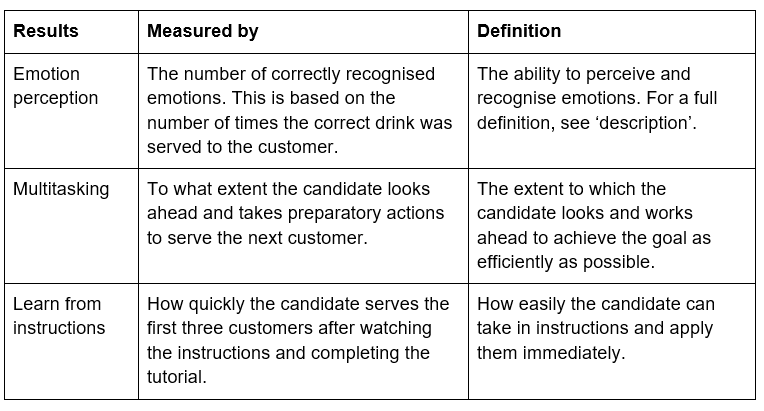