The Adaptive Career Values Inventory (ACI) is an adaptive version of the CV-N (Career Values Normative), a questionnaire that measures which factors in their work motivate the candidate.

The ACI can be used in any situation where it is important to learn more about a candidate’s career values. Because this questionnaire can be completed in such a short timeframe, it is extremely versatile in its application, e.g. for coaching and career counselling. Furthermore, it can easily be combined with other questionnaires without requiring your candidate to spend hours on end answering questions.

Example from the ACI report 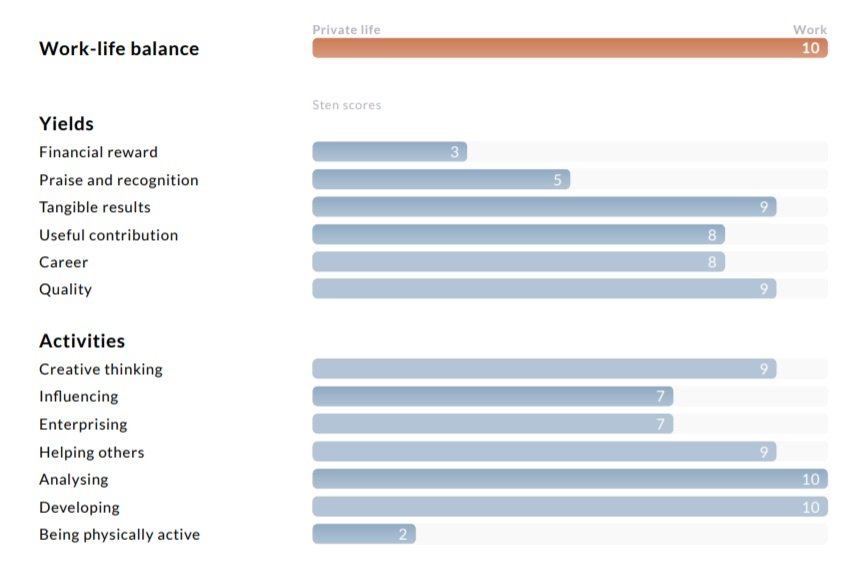 The questionnaire is based on various theoretical models, including Schwartz’s values (1999), Schein’s career anchors (1993) and Maslow’s Hierarchy of Needs (1943).

To develop this adaptive questionnaire, we conducted extensive research to determine what information each question provides regarding various career values. Simply put, the system selects the one question out of many that, following the previous question, will provide the most information. In practice, this means that filling out the questionnaire is a much more pleasant experience for candidates. They will hardly encounter any “duplicate” items that enquire after the same characteristics and they will finish the questionnaire up to three times faster.