Persons of integrity act in accordance with their beliefs and promises. The Moral Values Questionnaire can, in a relatively short time of 15-20 minutes, sketch a picture of the chance that a person will exhibit moral behaviour. This says something about a person's integrity. The Moral Values Questionnaire sketches a picture of several scales related to moral behaviour: Modesty, Honesty, Moral stability, Materialism.

In developing this questionnaire, use was made of the Honesty-Humility factor of the HEXACO personality questionnaire, which has been shown to be a good predictor of work performance (Van der Heijden, 2009) and is based on four core concepts: Modesty, Honesty, Moral stability and Materialism. There have been several earlier versions of this Moral Values questionnaire. Researchers have sought which questions functioned best, modifying or deleting questions in the process. The structure of the questionnaire has also been improved after factor analysis. The current Moral Values Questionnaire consists of 56 questions. For each question, candidates are asked to indicate to what extent the proposition applies to them. See also Figure 1.

The reliability of a questionnaire indicates the instrument’s accuracy, which relates to the reproducibility of the measured outcomes. The reliability of the (general) factor score was calculated using the formula for the stratified alpha (see Nunally, 1978, p. 248). With an outcome of .94, this reliability was very high. Generalisability was calculated with the alpha formula, though based on scale scores rather than the items (see Snijders, Tellegen & Laros, 1988). The generalisability rating indicates the expected correlation with a factor score based on a different, equally large sample of scale scores from the same domain as the factor in question. With a rating of .79, the generalisability of the questionnaire is considered sufficient.

Table 1 shows the reliabilities of the four scales. These are, according to COTAN (2009) guidelines, sufficient to good, which means that the questionnaire is reliable enough to be used for recruitment purposes.

In order to determine the general internal structure of the questionnaire, several analyses, including factor analyses, were carried out to provide evidence of the internal validity of the questionnaire. The questionnaire is structured in accordance with the structure of Moral Values found in literature, based on a general (main) factor and several subordinated scales for the purpose of differentiation. For a more detailed description of this analysis, please refer to the Addendum to the Moral Values Guide.

In order to say something about external validity of the Moral Values Questionnaire, it was compared with the Workrelated Personality Inventory (WPI) in a study. The correlation between the two tests is shown in Table 2. 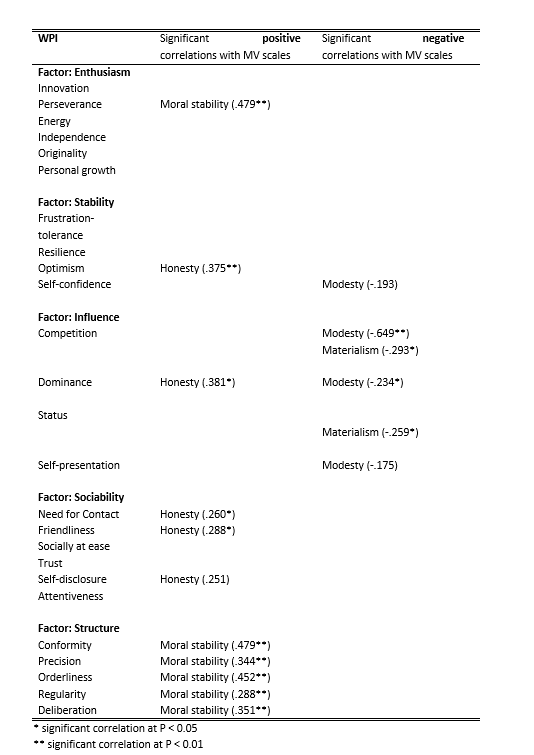 The scales of the Moral Values Questionnaire have explainable correlations with the scales of the WPI. For example, there is a negative correlation between the Modesty scale and scales that say something about a person’s tendency to exert Influence, with modest people scoring lower on Influence scales. In addition, it is clear that there is a positive correlation between the Moral stability scale and scales that say something about a person’s tendency to apply structure. People who score higher on Precision  and Conformity also have greater Moral stability. It can also be seen that people with high scores on Materialism have lower scores on scales that say something about wanting to win (Competition) and valuing prestige (Status). Finally, it appears that people with a higher score on Honesty also score higher on the Sociability factor. People who are more sincere will also tend to be more kind and caring and have better social skills. For a more detailed explanation of the, please refer to the Moral Values Guide.

The results regarding the correlation between the scales used in the WPI and the Moral Value Questionnaire show that several scales are correlated, contributing to the external validity of the questionnaire.