The ‘Rally’ game is based on the neuropsychological test, the Flanker task (Eriksen & Eriksen, 1974). The Flanker task is used in science and in psychodiagnostics to measure response inhibition. Game elements are added to this neuropsychological test to motivate and enthuse candidates. The candidate is absorbed in playing the game (this is referred to as ‘flow’) and is therefore less aware of the assessment element. The game results thus better reflect the candidate’s best performance. A big advantage of using a game is that it improves the candidate experience. Using a game and game technology also means that response inhibition can be measured more accurately, so that a greater amount of data can be collected in a shorter period of time./p>

The ‘Rally’ game can be applied to all contexts, both selection and advisory, in which reaction time and/or response inhibition are important. Response inhibition is important for targeted action and is therefore a part of everyday life. In certain professions, such as the police, fire fighting, the military and security, it is extremely important to be able supress impulses. Reaction time can be measured for certain professions where quick reactions are important. For example for jobs in the transport sector.

This game was developed to measure response inhibition and reaction time. This game is based on the Flanker task neuropsychological test. Game elements such as graphics, levels, rewards and feedback were added to the test. This test was adapted after conducting three qualitative pilot studies. Based on the feedback and experience from game participants, the most important adjustment was that the game’s level of difficulty increases faster. A usability study was also carried out to ensure that the game was in line with the target group, the general Dutch workforce. User experience and game interpretation were analysed by conducting interviews (thinking-out-loud and probing interviews) with people (N = 23) from various cultural backgrounds, educational levels, age, and game and computer experience. The results of this study formed the basis of improvements to the game and the tutorials, thus making the game accessible to everybody.

The current reference group is based on data collected from research. This sample (N = 172) is representative of the Dutch labour force in terms of work situation (working or not working), gender, age and educational level.

This shows the overall performance of each game. This is shown as a graph, with on the y-axis accuracy as a sten score and the x-axis reaction time as a sten score. 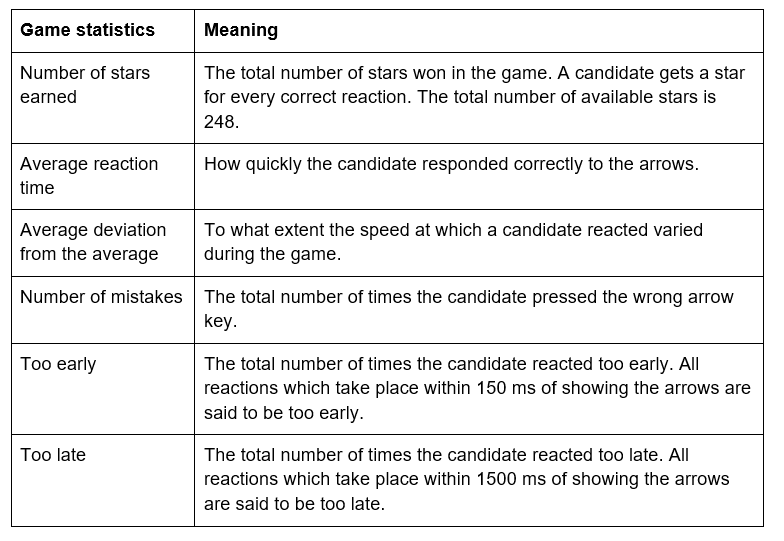 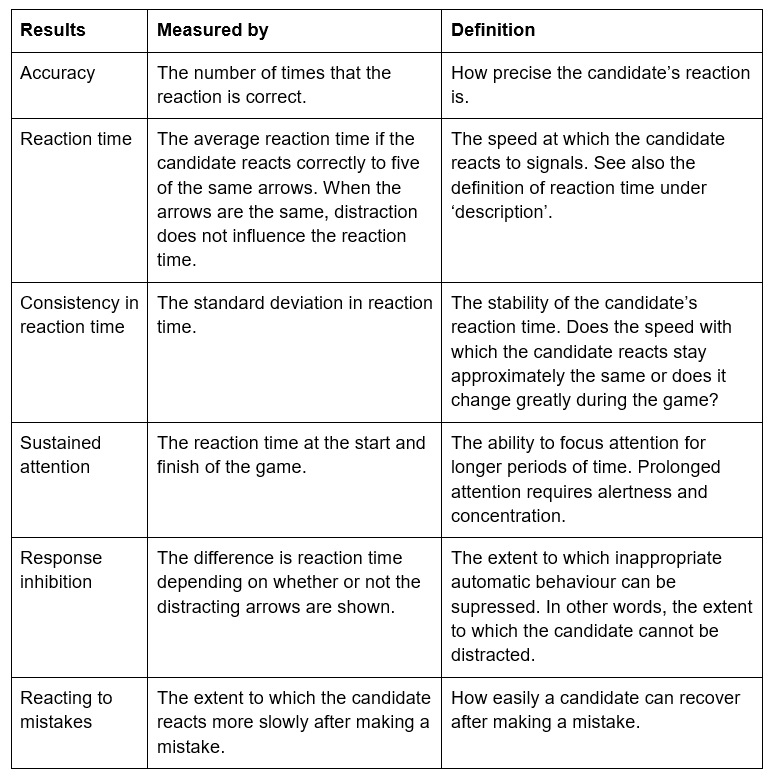