Persons of integrity act in accordance with their beliefs and promises. The Moral Dilemmas questionnaire can, in a relatively short time of 25 minutes, sketch a picture of the chance that a person will exhibit moral or immoral behaviour in ambivalent situations. This says something about a person's integrity. The Moral Dilemmas questionnaire sketches a picture of the extent to which a person attaches importance to rules and takes their responsibility, the ease with which they make decisions and the degree to which they will tend to prioritise their own good or the general interest.

In developing this questionnaire, the choice was made to measure integrity by means of various integrity dilemmas. A person faced with an integrity dilemma has to weigh up conflicting obligations and interests. A dilemma occurs when a person is faced by two mutually exclusive values, standards or ambitions. Integrity manifests itself in the choice made by a person faced with a dilemma, with the underlying motivation and substantiation of said choice being particularly important. Thomas Nagel holds that there are five different types of moral criteria that can give rise to conflicting demands: obligations, rights, utility, personal commitment and perfectionist ideals (see the Guide on Dilemmas for a more detailed description).

There have been several earlier versions of this Moral Dilemmas questionnaire. Researchers have pinpointed the most distinctive integrity dilemmas and determined how to best present the dilemmas.

The current Moral Dilemmas questionnaire consists of 12 integrity dilemmas. Each dilemma comes with approximately 5 ipsative questions and consists of two mutually exclusive propositions. Candidates must choose which of the two propositions they agree with most. In many case, they will have to choose the lesser of two evils. See also the example: 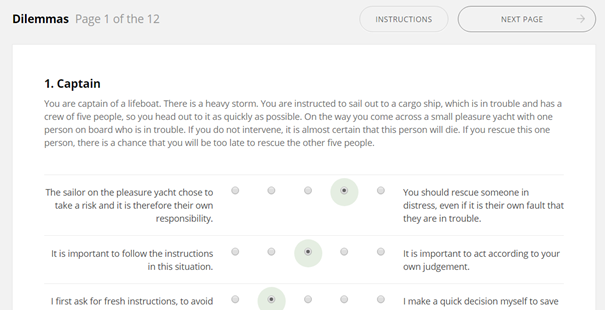 The reliability of a questionnaire indicates the instrument’s accuracy, which relates to the reproducibility of the measured outcomes. One of the most commonly used reliability measures for instruments such as the Moral Dilemmas questionnaire is Cronbach’s alpha, a measure of internal consistency (Nunnally, 1978). Table 1 shows the reliabilities of the four scales.

These scales have limited reliability for recruitment purposes but are sufficient for advisory purposes.

Conceptual validity refers to the theoretical concept used by the test to explain the behaviour  To investigate the conceptual validity of the test, we examined the correlation between the Work-related Personality Inventory and the Moral Dilemmas Questionnaire. Expected correlations between scales were formulated beforehand, with the results proving most expectations to be justified (indicated with a + in Table 2). 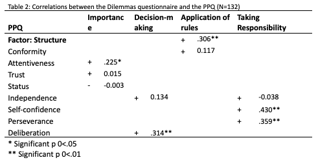 The correlation between the Moral Dilemmas and Moral Values Questionnaires were also investigated (Table 3). Again, the identified correlations are easy to explain. The highest correlations are generally found on the Moral stability scale, as people with certain values and standards will often be led by them when faced with moral dilemmas. Moral stability has the highest correlation with the Application of rules scale, and people with greater Moral stability will generally be stricter in applying their values and standards (rules) to moral dilemmas. The positive correlations between Decision-making and Taking Responsibility on the one hand and Honesty on the other hand can also be explained. It is to be expected that sincere people would also be sincere in their choices and stand behind their choices, i.e. take responsibility for the choices they have made.

The Dilemmas Questionnaire has a selection norm group (N = 159), who completed the test in a selection setting. For a full description of the norm group, please refer to the Moral Dilemmas Manual.

This questionnaire can be used to learn more about how and why a person will take certain decisions when faced with moral dilemmas. The questionnaire can be completed by all members of the Dutch labour force. In recruitment settings, this questionnaire will give an indication of the extent to which the candidate will exhibit integrity and the resulting report can serve as a guide for the personal interview.