What are we talking about when we talk about competencies? There are many concepts formulated as competencies. We will clarify the concepts in this section.

Let’s zoom in on what competency is and what lies behind it. Many definitions for the ‘competency’ concept are also applied here. There are even people who claim that it is a redundant concept. Personally, I think this is a compact and appropriate definition:

“A competency is the ability of an individual to meet a job position requirement whereby the employee applies his/her knowledge, attitude and skills in such a way that it leads to successful behaviour in challenging or critical situations where the employee can make a difference.”

It’s a bit of an awkward sentence, but that kind of ties in with the concept of competency itself. It is something someone can do (ability) and what is required of an employee in a job position, namely that some of these challenging and critical situations can conclude in a successful conclusion (success). In addition, it uses everything he or she has, namely own knowledge and experience but also his/her attitude plays a role. And within that are other agreed matters, such as personality, knowledge and values. Because a picture says more than a thousand words the Iceberg model gives us an outcome.

The Iceberg model shows the different components that that underpin a competency. We have added a component to this: context. 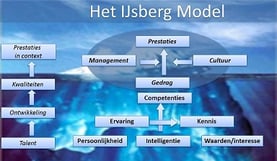 In the model we see ‘Competencies‘ positioned just below the surface level. It is the ability to show effective behaviour and this behaviour is exactly then properly visible. This behavior occurs in the context of an organisation in an internal and external environment. We know that in the internal environment the culture and management play an important role in what behaviour employees actually exhibit. As previously indicated, a manager can influence the way an employee develops his talent and whether his/her talent really flourishes.

Culture also plays a major role. A so-called ‘sixes culture’ has a leveling effect on the effective behaviour of employees. In a more motivating and ambitious culture, everyone will get the most out of themselves.

The ‘behaviour’ and ‘result’ relationships depend on the environment. With an employment agency is is important what behaviour is effective in a certain conjunctural period. You can also be dependent on the market, competitors, colleagues, but also on your product.

There are then five terms under ‘Competencies’. To begin with, the ‘raw’ talent comes from the personality, intelligence and values (motivation) of an employee. These together mainly determine the level which a person can achieve with competencies. But you should of course also do something with your talent! Knowledge helps you, but you will also have to gain experiences There also lies the target for coaching by the manager who, for example, gives an employee the necessary experience that contribute to the unfolding of talent.

The Iceberg model gives a good frame of reference which makes it important for managers to focus on what takes place above the surface level. But knowledge about underlying factors and the way you can develop somebody also contribute to this.

In a sense, competency management is very behavioristic; it tries to describe effective behaviour in quite a lot of detail . The question is if that is possible. If you look at a behavioural indicator in the way of “uses arguments to which the other is sensitive to” the behavior is ‘arguing’. But the criterion ‘ to which the other is sensitive’ is not naturally in itself not a description of behaviour.

Many such sentences appear in competency frameworks. An example I once saw about ‘Cooperation’ makes this very clear: “contributes to a positive team atmosphere.” What somebody exactly does is not clear; treat the team to cakes, makes jokes, or provide a listening ear to complaining colleagues, it is all possible. It is therefore important to realise what really matters in practice: the behavioral indicators should clarify to an employee and his/her manager approximately what behavior is desired.

It is my belief that the written language competency framework is not sufficient for this. It may can give ideas and direction, but what is really needed for successful competency management, is a manager who coach well and provide feedback. In addition, he will be able to describe the behaviour in much more detail than is possible with the competency framework. Therefore training is desirable.

A Competency Framework is a coherent model for describing the effective behaviour in an organisation consisting of competencies, definitions of these competencies and behavioural indicators. There are different Competency Frameworks, such as general standard models or models that are developed specifically for an organisation. In addition, competency frameworks or models can be broken down into job profiles. For example, ‘political sensitivity’ is a competence that is important for a local council, but not for every commercial organisation.

Since the 90s, several, more general models have been developed. A general competency model developed by SHL is used by werk.nl, for example, together with the so-called competency atlas. This contains twenty two general described competencies. These competencies are broken down into sub-components. They are used, amongst others, for professional descriptions.

A commonly used model was introduced by ADC, now taken over by Right. Many organizations adopted this and used it as the basis for their own competency framework. As this example from research conducted by TNO shows: Competency focused training and competency management.
The Administrative Department (AD) has developed a competency model which is widely used within the government. It includes fifty competencies. This is used, amongst others, in the profile of an AD manager.

An example of a general model that is tailored to the own organisation is the Altrecht competency model. A general competency model is also included in easy360, which you can use freely with competency management and 360 degree feedback.

Criticism of the general competency model

The general competency models have some disadvantages, which can be summarised as follows:

To offer an alternative to existing competency models we have developed a compact model, consisting of ten competencies. We have called these competencies qualities, because they are closer to personal qualities than competencies. In addition, we have sought to offer an umbrella system to make all effective behaviour negotiable whilst at the same time coming to unequivocal terms. The latest version of this model has ten qualities.

The oral and written exchange of information in such a way that it is well understood.

Dealing with and establishing relationships with others based on empathy and respect. Active cooperation. Social intelligence.

Influence the opinions and beliefs of others. Motivate others to the desired behaviour. Social intelligence AND the ability to persuade others to accept points of view.

Structuring and organising the work, where people, resources/tools and time are being aligned to achieve goals.

Working in a structured, methodical, organised, precise and concentrated way, according to established schedules, procedures and agreements.

Acting in accordance with and enforcing standards and values, from outside pressure deviating from or opposing personal interests.

Sets themselves and others high goals, wants to perform better and looks for challenges.

Whether or not to go to levels?

It can be useful to introduce functioning levels into competencies. This does make the model much more complex, because at each level you must make meaningful distinctions in the behaviour shown. Again, it is primarily for which you objective want to achieve with competency management. From this you must deduce if a distinction between levels is meaningful.
This may for example be the case where the objective is also to ‘match’ competencies. Then it makes sense to say that someone has mastered competency X on level Y. Or when specific training is needed to achieve a higher level of competency management. For example, negotiations on a strategic level require a certain experience and training. In practice a model with no levels is usually used.

You also see models with many level indicators. These levels are typically characterized on the basis of the complexity of the situations in which the competency must be demonstrated. As pass during a Saturday amateurs game may be easier than in the Premier League. For matching purposes we work with a job analysis module that has three levels, with another two sub levels within it. This is based on the classification of European language levels. We chose this degree of differentiation because we wanted to construct a general model, whereby it is possible to match across different professions and job functions. For internal use within an organisation it will usually not be necessary to work with six levels. The levels are as follows:

Elementary application of the competency. Can fall back on others. Others must help to deploy this competency well.

Can independently deploy this competency at a low complexity, but with supervision. Can work independently in standard work, during errors and problems can fall back on others.

Can deploy this competency independently without direct supervision, at an average complexity.

Independently functioning at the level of this competency, as a full member of work teams and as an external representative.

Shows initiative to teams and other organisational areas. Can be a mentor for this competency. Contributes to strengthen this competency at team level. Shows competent behaviour in more complex situations.

Can handle the most complex situations. Initiates implications at the level of other organisations and larger external audiences. Can handle the greatest degree of complexity.

Setting up a competency profile for a job position

During setting up a competency profile for a job position it is useful to deploy a competency set or competency framework. If no organisation specific language is developed, it is convenient to use a standard set. You could use one of ours for this or use another set. There are then some methods to follow:

You can ask one or more people about which seven competencies they consider important for a job position. It makes sense to invite successful staff, their managers and eventual HR people for this. Then you can have a discussion about the competencies that they selected to achieve to a consensus. This is a fast method, which usually leads to a good result. One disadvantage is that it is not based on an analysis and that not everyone has the same influence. When time permits, we therefore recommend one of the following methods.

The critical incidents method assumes that in a job profile are a limited amount of situations where it really counts. In those situations, the right competencies must be shown to be successful. It works as follows:

On the basis of behavioural interviews

This method is similar as above. A trained professional interviews now several successful staff and their management. This has, in general, more depth than the above method and is often more accurate. For a civil servant role, we discovered that the main competency consisted of policy being written down where they knew that there was support. They spent a lot much attention on networks. For some it went so far that they had a very tactical way of influencing the policy of politicians, before there was even a request to make a policy. This method is especially useful when there are multiple staff members and when there is a lot of difference in the effectiveness of the various staff members.